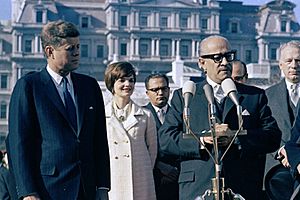 Trained as a physician, his specialty was pediatrics. Villeda Morales was a liberal who supported the democratization of Honduras after a long period of military rule. He was the Liberal Party candidate in the 1954 presidential election, the first free election for over two decades, winning a plurality over a divided National Party but falling short of a majority. The deadlock led to a coup by Vice-President Julio Lozano Díaz. Following the military junta of 1955, he was in 1957 chosen by the country's constituent assembly to serve as president and oversee the transition to democracy. Villeda Morales immediately embarked on a campaign which he believed would help the poorer elements of society, introducing welfare benefits and enacting a new labor code that favored the country's large working class population (working on the theory that regulations, rather than the market, can improve, rather than undermine, long-term conditions of work). While these steps were popular with the masses, they enraged the traditional holders of power in Honduras: the military and the upper classes. When it seemed likely that the Liberal Party candidate, Modesto Rodas Alvarado, would win the 1963 election with an even stronger mandate to enact social reforms, the military responded with a coup, just ten days before the election was scheduled to take place.

Ramon Villeda Morales died on November 26, 1971, in New York City, where he was serving as the Honduran Ambassador to the UN. His widow, former First Lady of Honduras Alejandrina Bermúdez Milla [es], died in November 2012, aged 95.

Villeda Morales helped modernize Honduras, and to create its public health, public education, and social security systems. He was a key supporter of the Alliance for Progress.

San Pedro Sula International Airport is named after him. His son Mauricio Villeda Bermúdez is a leader of the Liberal Party and was a candidate for the presidency in the 2013 elections.

All content from Kiddle encyclopedia articles (including the article images and facts) can be freely used under Attribution-ShareAlike license, unless stated otherwise. Cite this article:
Ramón Villeda Morales Facts for Kids. Kiddle Encyclopedia.