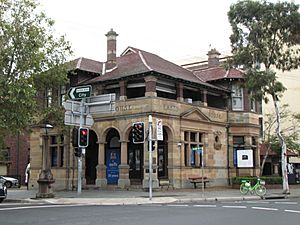 The Randwick Post Office is a heritage-listed former post office located at 124 Alison Road in the Sydney suburb of Randwick in the City of Randwick local government area of New South Wales, Australia. The former post office was designed by Walter Liberty Vernon in his capacity as NSW Government Architect and was built from 1897 to 1898 by W. B. Chessell. It is also known as Randwick Post Office (former) and Jubilee Fountain. The property is owned by Australia Post (Federal Government). It was added to the New South Wales State Heritage Register on 23 June 2000.

Pre-1780s the local Aboriginal people in the area used the site for fishing and cultural activities - rock engravings, grinding grooves and middens remain in evidence. In 1789 Governor Arthur Phillip referred to "a long bay", which became known as Long Bay. Aboriginal people are believed to have inhabited the Sydney region for at least 20,000 years. The population of Aboriginal people between Palm Beach and Botany Bay in 1788 has been estimated to have been 1500. Those living south of Port Jackson to Botany Bay were the Cadigal people who spoke Dharug, while the local clan name of Maroubra people was "Muru-ora-dial". By the mid nineteenth century the traditional owners of this land had typically either moved inland in search of food and shelter, or had died as the result of European disease or confrontation with British colonisers.

Randwick takes its name from the town of Randwick, Gloucestershire, England. The name was suggested by Simeon Pearce (1821–86) and his brother James. Simeon was born in the English Randwick and the brothers were responsible for the early development of both Randwick and its neighbour, Coogee. Simeon had come to the colony in 1841as a 21 year old surveyor. He built his Blenheim House on the 1.6 hectares (4 acres) he bought from Marsh, and called his property "Randwick". The brothers bought and sold land profitably in the area and elsewhere. Simeon campaigned for construction of a road from the city to Coogee (achieved in 1853) and promoted the incorporation of the suburb. Pearce sought construction of a church modelled on the church of St. John in his birthplace. In 1857 the first St Jude's stood on the site of the present post office, at the corner of the present Alison Road and Avoca Street.

In April 1859 a number of residents of Randwick petitioned the Postmaster General for the opening of the mail service to the locality and establishment of a post office in Randwick. Thus, the first mail service to Randwick began in 1859, with a local store owner, John Grice, acting as the postmaster from his store and inn in Avoca Street.

In April 1887 Randwick Municipal Council decided to apply to have a purpose-built post office erected in Randwick. Following inspection of a number of sites, a portion of Church Land at the corner of Alison Road and Avoca Street was secured at a cost of £30 per square foot. The land was resumed in April 1891, with a total cost of £4,137 being paid. Tenders for construction of the building were called for in 1897, and WB Chessell was the successful tenderer. Work then began to a design by Walter Liberty Vernon, the New South Wales Government Architect. The Federation Free Classical style office was opened on 23 March 1898. The new building comprised a general office and vestibule occupying 38 ft by 37 ft, which included a postmaster's room and a telephone room. The postmaster's private residence comprised two living rooms, five bedrooms and a bathroom.

It has a predominantly hipped, complex terracotta shingled roof, fanned over the eastern faceted bay, with a crowning louvred gablet at the centre. Two brick and sandstone chimneys with terracotta pots penetrate at the north and south sides of the main building, with a third to the northern single-storey section.

There are pediments over the south and east stone mullioned windows on the ground floor, with an arcade to Alison Road and a continuous dentilled string course running through the pediment base level. There is scroll detailing below the leadlight oculus to the eastern facade and downpipes have been chased into the sandstone to the southern facade. Some segments of the pediment to the south facade have been replaced.

The roofline, with shaped rafter ends continues over the first-floor balcony, which is partially enclosed at the western end of the south side. The balcony roof is supported by squat brick and sandstone pillars, the walls have been rough cast rendered and painted cream and it has a bituminous floor covering.

As at 22 June 2000, The Post Office is in generally good condition and appears largely structurally intact.

The Randwick Post Office appears largely structurally intact, and retains the features which make it culturally significant including architectural features such as the asymmetry of the exterior, the classical colonnade and strongly contrasted materials, textures and colours, along with the prominence of the building in the streetscape.

There is an intrusive Telstra building adjacent to the northern façade of the Randwick Post Office.

As at 22 June 2000, Randwick Post Office is significant at a State level for its historical associations, strong aesthetic qualities and social value.

Randwick Post Office is historically significant because it is associated with the NSW Government Architect Walter Liberty Vernon, and is part of an important group of works by Vernon, a key practitioner of the Federation Free style. Randwick Post Office is also associated with the pattern of subdivision and the development of communications services in the Randwick area.

Randwick Post Office is aesthetically significant because it is a fine example of the Federation Free style, with strong visual appeal. It is located on a prominent corner site and makes a significant contribution to the streetscape of the Randwick civic precinct.

Randwick Post Office is also considered to be significant to the community of Randwick's sense of place.

Randwick Post Office was listed on the New South Wales State Heritage Register on 23 June 2000 having satisfied the following criteria.

Built on Church Land, the building is also associated with the pattern of subdivision and development of the Randwick area.

Randwick Post Office is aesthetically significant because it is a fine example of the Federation Free Style, designed by Vernon, with strong visual appeal.

The architectural style and prominent location of the post office also make it a focal point of the Randwick civic precinct, endowing it with landmark qualities.

As a prominent civic building, Randwick Post Office is considered to be significant to the community of Randwick's sense of place.

The site has some potential to contain an archaeological resource, which may provide information relating to the previous Church use of the site and use associated with the Post Office.

Randwick Post Office is a particularly fine example of the work of the NSW Government Architect W.L. Vernon.

Randwick Post Office demonstrates the principle characteristics of the group of post offices constructed in the late nineteenth century in NSW by the Government Architect's Office.

Randwick Post Office is a strong example of the Federation Free style of architecture. It is also part of an important group of works by Government Architect Walter Liberty Vernon.

All content from Kiddle encyclopedia articles (including the article images and facts) can be freely used under Attribution-ShareAlike license, unless stated otherwise. Cite this article:
Randwick Post Office Facts for Kids. Kiddle Encyclopedia.