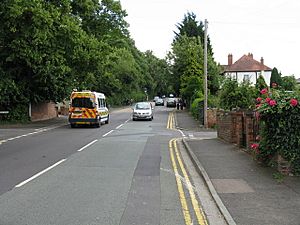 The A44 as it climbs out of Worcester towards Red Hill

Red Hill is an area of Worcester, Worcestershire, England. It is in the south-east of the city on the A44. It has historically been used as high ground to attack the city and as a place of execution.

Red Hill is mentioned regarding King Stephen's attack upon the city of Worcester in 1149. He burnt Worcester and expelled William de Beauchamp, but the castle against which he raised two forts at Red Hill near Digly and Henwicks Hill resisted his attacks. It was said that the remains of this fort could still be seen in 1820.

In the 17th century, it was an area of execution. Edward Oldcorne and Ralph Ashley who had been captured at nearby Hindlip Hall were hanged, drawn and quartered on the 7 April 1606. Holy relics of these Jesuit priests are still revered today. The others executed were a tenant farmer named Perkes, Humphrey Littleton and John Wintour. All were executed for involvement with the Gunpowder plot.

The hill featured also in the Battle of Worcester in 1651 when it was fought over by Royalist forces and Oliver Cromwell's forces. Cromwell used the heights of Red Hill and Perry Wood to hold his artillery and most of his troops on the 29 August 1651. At the time Red Hill was just outside the city gates. The Royalist attacks on the guns were turned back because there was a Worcester spy named Guise. He was caught and hanged.

Red Hill continued to be a place of execution for some time. On the 16 August 1805, for instance, it is recorded that W.Dalton was executed for two counts of burglary. It was said that "His demeanour was becoming".

All content from Kiddle encyclopedia articles (including the article images and facts) can be freely used under Attribution-ShareAlike license, unless stated otherwise. Cite this article:
Red Hill, Worcester Facts for Kids. Kiddle Encyclopedia.