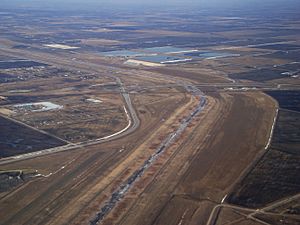 Red River floodway at the southeast corner of the Winnipeg city limits near Lorette as seen from the air. The Trans Canada Highway and Canadian National Railway bridges over the floodway can be seen, along with the Perimeter Highway.

The Red River Floodway (French: Canal de dérivation de la rivière Rouge) is an artificial flood control waterway in Western Canada. It is a 47 km (29 mi) long channel which, during flood periods, takes part of the Red River's flow around the city of Winnipeg, Manitoba to the east and discharges it back into the Red River below the dam at Lockport. It can carry floodwater at a rate of up to 140,000 cubic feet per second (4,000 m3/s), expanded in the 2000s from its original channel capacity of 90,000 cubic feet per second (2,500 m3/s).

The Floodway was pejoratively nicknamed "Duff's Ditch" by opponents of its construction, after Premier Duff Roblin, whose Progressive Conservative government initiated the project, partly in response to the disastrous 1950 Red River flood. It was completed in time and under budget. Subsequent events have vindicated the plan. Since its completion in 1968, the Floodway is estimated to have prevented over $40 billion (CAD) in cumulative flood damage. It was designated a National Historic Site of Canada in 2000, as the floodway is an outstanding engineering achievement both in terms of function and impact.

From south to north, the Floodway passes through the extreme southeastern part of Winnipeg and the rural municipalities of Ritchot, Springfield, East St. Paul, and St. Clements.

Construction of the Floodway started on November 27th, 1962 and finished in March 1968. The construction was a major undertaking with 76.5 million cubic metres (2.75 billion cubic feet) of earth excavated—more than what was moved for the Suez Canal.

At the time, the project was the second largest earth-moving project in the world – next only to the construction of the Panama Canal. The total cost at the time was $63 million (CAD), equivalent to approximately $505 million today. 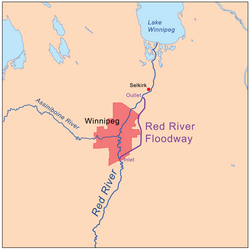 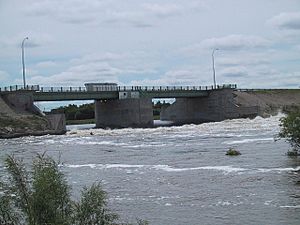 Control gates at the inlet to the Floodway 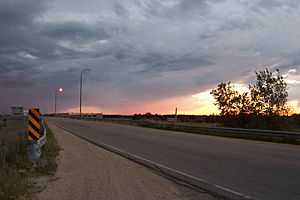 Bridge over the control gates

The Floodway protection system includes more than just the channel to the east of the city, but also the dikes along the river through Winnipeg and the "Brunkild Z-dike" extending to the west from the south of the city. The Brunkild Dike was built in 1997 during the "Flood of the Century," when the volume of water exceeded the safe capacity of the Floodway and water lapped within inches of the city's dikes. Primarily as a result of the Floodway, the city suffered little flood damage. After the 1997 flood, a 2004 re-assessment of the floodway and its channel capacity indicated that 2,550 m3/s (90,000 cfs) could be passed through the floodway during a major flood, but this is considered above the design capacity as it would submerge bridges, and the decision was made to further expand the floodway.

The Brunkild dike is the limiting factor on the volume of water that can be diverted around the city, as a result of the extremely low grades in the area. In 2003, the province announced plans to expand the Floodway, increasing its flow capacity from 1,700 m3/s (60,000 cu ft/s) to 4,000 m3/s (140,000 cu ft/s). It was decided to widen the Floodway as opposed to deepening it because of the soil and ground conditions in the area. Many underground aquifers in the area are used for drinking water for rural residents and the aquifers could potentially be contaminated if the floodway were deeper. There is also potential for pressures to increase in the aquifers, causing a "blowout" to occur, where water would flow from the aquifers in the ground to the surface and reduce the capacity of the Floodway. Officials decided widening the floodway would be the best option despite the lower hydraulic capacity that would result.

Below are the peak flow rates recorded on the Red River Floodway since it was completed in 1968.

Since the 1997 Red River flood resulted in water levels that took the existing floodway to the limits of its capacity, various levels of government commissioned engineering studies for a major increase in flood protection for the City of Winnipeg. Work began in late 2005 under a provincial collective bargaining agreement and has included modifications to rail and road crossings as well as transmission line spans, upgrades to inlet control structures and fire protection, increased elevation of existing dikes (including the Brunkild dike), and the widening of the entire floodway channel. The NDP government set aside a portion of the construction budget for aboriginal construction firms. The Red River Floodway Expansion was completed in late 2010 at a final cost of more than $665,000,000 CAD. Since the completion of the expansion, the capacity of the floodway has increased to 4,000 cubic metres (140,000 cubic feet) per second, the estimated level of a 1-in-700 year flood event. (Using the flow rates of Niagara Falls as a standard of comparison, this is more than double its average of 1,833 cubic metres and about a third over its maximum.) The expanded floodway now protects over 140,000 homes, over 8,000 businesses, and will prevent more than $12 billion (CAD) in damage to the provincial economy in the event of a 1-in-700 year flood.

Considerations in the United States

In 2009, the North Dakota city of Fargo has been contemplating building their own floodway, or diversion channel, similar to the Red River Floodway. This is in response to the disastrous floods of 1997 (nicknamed "The Flood of the Century"), and in early 2009.

All content from Kiddle encyclopedia articles (including the article images and facts) can be freely used under Attribution-ShareAlike license, unless stated otherwise. Cite this article:
Red River Floodway Facts for Kids. Kiddle Encyclopedia.