The red flour beetle (Tribolium castaneum) is a species of beetle in the family Tenebrionidae, the darkling beetles. It is a worldwide pest of stored products, particularly food grains, and a model organism for ethological and food safety research.

Adult beetles are small, around 3-4mm long (1/8 inches), of a uniform rust, brown or black color.

The red flour beetle attacks stored grain and other food products including flour, cereals, pasta, biscuits, beans, and nuts, causing loss and damage. The United Nations, in a recent post-harvest compendium, estimated that Tribolium castaneum and Tribolium confusum, the confused flour beetle, are "the two most common secondary pests of all plant commodities in store throughout the world."

The red flour beetle is of Indo-Australian origin and less able to survive outdoors than the closely related species Tribolium confusum. It has, as a consequence, a more southern distribution, though both species are worldwide in heated environments. The adult is long-lived, sometimes living more than three years. Although previously regarded as a relatively sedentary insect, it has been shown in molecular and ecological research to disperse considerable distances by flight. 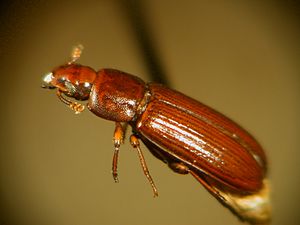 Multiple mating events can ensure that females obtain a greater net amount of sperm, resulting in an increased likelihood of successful fertilization. In nature, repeated matings could result in males that have a low sperm count. Due to the males' low sperm count, a female may need to mate with several males before being successfully inseminated.

Although multiple mating events may result in an increased likelihood for finding genetically compatible sperm, genetic compatibility cannot always be considered a major fitness advantage for polyandrous behavior. The increased viability of embryos—due to increased genetic compatibility—did not significantly increase the number of adult beetles over time, and therefore, did not play a significant role in the fitness of the overall population. However, increased genetic compatibility could increase the genetic diversity of the population, which maybe useful in various different environments. High genetic diversity within a population can lead to high phenotypic variation, which can subsequently enable some variants to better survive and reproduce given a sudden environmental change.

The availability of resources and population size can greatly affect how many matings each individual participates in. Increased population size within a given area with fixed resources can limit how many offspring can survive. Therefore, males must often compete with other males to be the last male that mates with the female, to increase his fertilization rate. In fact, in areas with limited resources, higher rates of cannibalism among competitor males can result in an overall decrease in fitness of the population since there is a net decrease in offspring production and survival.

Females of different geographic regions—and subsequently, different genetic backgrounds—often show great variation in mating behavior. Certain strains of females avoid multiple mating events while other strains of female engage in higher degrees of polyandry. This variation suggests that polyandry can be advantageous in some populations but not in others.

Male beetles can also vary in the females they choose to mate with. Males are extremely selective in their mate choice. They prefer to mate with mature, virgin females. If a male mates with a virgin female, his sperm has an extremely high chance to fertilize the female if another male does not mate with her. Males are able to differentiate between virgin females and non-virgin females through scent; the wax-like secretions of competitor males could be found on the reproductive glands of non-virgin females, but not on virgin females. Males that possess an increase in the number of odor receptors are better able to choose which females to reproduce with and subsequently, increase their fitness. Some males possess better suited characteristics to detect the maturity and reproductive status of the female, and as such, will preferentially breed with only those females that will have the highest production of offspring. Likewise, males that deposit stronger scents will have an indirect fitness advantage due to their odor deterring other potential mates from an already inseminated female.

Polygamy in red flour beetles is a behavior common to both males and females of this species. Polyandry is thus polygamy in the female members of a population as discussed in the section above. On the other hand, polygyny refers to polygamy practiced by males in a population.

In red flour beetles, females that engage in polygamous behavior produce more offspring than those that are less polygamous. Polygamy is mostly seen in populations that lack genetic diversity. Polygamy in less genetically diverse populations is a means of avoiding fertilization between beetles that are closely related since they may be genetically incompatible. The more partners that a male or female has, the higher the chances that at least one of the matings is with an unrelated partner and the greater the genetic diversity in the offspring. In this way, genetic incompatibility is reduced and diversity is increased in a population. For this reason, females copulate with more males when genetic diversity is low in order to attain fertilization success and also increase fitness in their subsequent offspring.

In some studies, however, it has been noted that fertilization can still occur when related beetles mate. Nonetheless, it is worth noting that there is a significantly lower number of offspring produced when inbred beetles mate than when the matings are between out-bred partners. Successful fertilization observed in a small portion of research in related beetles has led some biologists to claim that there may be no inbreeding depression in red flour beetles. Even though there is successful fertilization, it is observed that a lower number of total offspring is produced, which can be argued to be a type of inbreeding depression since it lowers reproduction fitness.

During mating, red flour beetles are known to engage in polygamous behavior. Male flour beetles have been known to recognize their relatives while the females do not have this capability. Lack of the ability to recognize their relatives has led females to mate with any male within the population. Female red flour beetles are also known to store sperm after mating. More sperm is stored by the first mating, which leads to less sperm stored in subsequent matings. However, amount of stored sperm does not stop the last male mate from fertilizing the egg. This is due to the fact that with each mating, males can remove previously stored sperm thus giving their own sperm an advantage to fertilize the egg.

In red flour beetles, males are known to engage in polygamous behavior. Research largely shows that Male red flour beetles engage in polygamous behavior to avoid inbreeding depression, especially when there is competition from other males. There is a higher fertilization success in out-bred males when they compete with inbred males to fertilize the same female.

In polygamous beetles, the male that last fertilizes the female ends up having a higher fertilization success. Polygamy can thus be seen as an evolutionary result as males compete to be the last to fertilize the female's egg and contribute more to the next generation. Sperm precedence is thus a means of evolutionary competition through which the males try to achieve greater reproductive success.

As a model organism

The Red Flour beetle has played an important role as a model organism serving as a model for development and functional genomics. Compared to Drosophila, the Red Flour beetle more closely represents the development of other insects. In 2008, the genome of Tribolium castaneum was sequenced, analyzed, and compared to other organisms such as Drosophila. The Red flour beetle and the fruit fly share about 10,000-15,000 genes. Despite their shared genes, they do have their differences. During development, anterior-posterior patterning is normally regulated by the bicoid gene in Drosophila. However, in the Red Flour beetle, there is no bicoid orthologue, but instead the genes orthodenticle and hunchback substitute for bicoid in anterior patterning.

Red Flour beetles are particularly useful for doing RNAi (RNA interference) experiments. RNAi is RNA that degrades mRNA transcripts to show a knock-down of gene function. Compared to in Drosophila, RNAi has a greater response in the Red Flour beetle, making it ideal for knock-down experiments.

CRISPR technology has been shown to be useful in studying Tribolium castaneum. In one experiment, researchers used CRISPR to knock-out the E-cadherin gene. E-cadherin is a membrane bound protein of epithelial cells involved in cell-cell adhesion. This resulted in developmental issues in dorsal closure. RNAi knock-down of E-cadherin shows the same effect. This shows that CRISPR technology and gene editing are viable options for studying the Red Flour beetle as an insect model organism.

Synonyms of Tribolium castaneum (Herbst) are:

The following names have been cited as synonyms of T. castaneum by some authors but they actually refer to other species:

All content from Kiddle encyclopedia articles (including the article images and facts) can be freely used under Attribution-ShareAlike license, unless stated otherwise. Cite this article:
Red flour beetle Facts for Kids. Kiddle Encyclopedia.