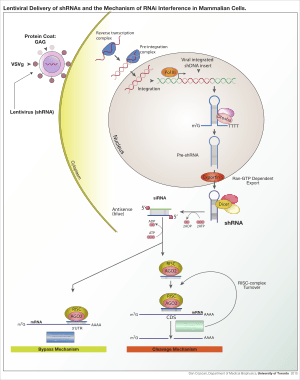 Lentiviral delivery of designed shRNAs and the mechanism of RNA interference in mammalian cells.

RNA interference (RNAi) is a process in living cells. It adjusts (moderates) the activity of their genes. RNAi molecules are a key to gene regulation. In 2006, Andrew Fire and Craig Mello shared the Nobel Prize in Physiology or Medicine for their work on RNA interference in the nematode worm Caenorhabditis elegans, published in 1998.

Two types of small RNA molecules – microRNA (miRNA) and small interfering RNA (siRNA) – do the work. These small RNAs bind to normal messenger RNA (mRNA) molecules and increase or decrease their activity. They can prevent a mRNA from producing a protein. RNA interference defends cells against foreign nucleotide sequences – viruses and transposons. Also, they control development, and gene expression in general.

The RNAi pathway is found in many eukaryotes including animals. RNAi is a valuable research tool, in cell culture and in living organisms. Synthetic dsRNA introduced into cells can suppress specific genes of interest. RNAi may be used for large-scale screens that shut down each gene to analyse cellular process or cell division. The pathway is also used as a practical tool in biotechnology and medicine.

The natural functions of RNA interference are:

All content from Kiddle encyclopedia articles (including the article images and facts) can be freely used under Attribution-ShareAlike license, unless stated otherwise. Cite this article:
RNA interference Facts for Kids. Kiddle Encyclopedia.