Redwoods Forest is a forest of naturalised coastal redwood on the outskirts of Rotorua, New Zealand, adjacent to the Whakarewarewa thermal area. The 6 hectares (15 acres) stand of Californian Redwoods is part of the larger Whakarewarewa State Forest.

The trees were planted at the beginning of the 20th century as part of a programme to assess the viability of various exotic tree species for commercial forestry in New Zealand. Subsequently these trees have grown faster than in their native homeland due to the richer soil and higher rainfall in the area, reaching over 70 metres (230 ft) height only 100 years later. 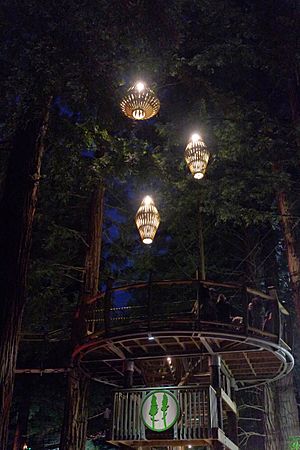 The area, also referred to as "Redwood Memorial Grove", is now protected and has become popular for recreational use, containing mountain bike tracks and the Redwoods Treewalk canopy walkway suspended between the trunks of the redwood trees. Above the walkway, wooden lantern sculptures are also suspended between the tall tree trunks. At night time, these are lit up, and coloured spot lights illuminate some of the forest floor vegetation and tree ferns. The forest is also home to endangered species of birds such as the New Zealand Falcon, North Island Robin and occasionally Whitehead (bird)

All content from Kiddle encyclopedia articles (including the article images and facts) can be freely used under Attribution-ShareAlike license, unless stated otherwise. Cite this article:
Redwoods Forest, Whakarewarewa Facts for Kids. Kiddle Encyclopedia.