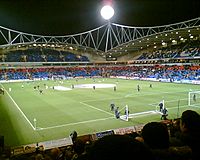 The Macron Stadium in 2006, when it was known as Reebok Stadium

Macron Stadium is a football stadium in the town of Horwich, near Bolton, in the county of Greater Manchester, England. It is the current home stadium of Bolton Wanderers F.C.. It opened in 1997 as Reebok Stadium, named after the club's former sponsor, the sportswear company Reebok. In 2014, after the sponsorship deal with Reebok ended, a new deal was signed with Italian sportswear company Macron, and the stadium was renamed accordingly.

On the stadium, there is the 188 from their current sponsor, 188Bet. The team is in the Football league championship.

All content from Kiddle encyclopedia articles (including the article images and facts) can be freely used under Attribution-ShareAlike license, unless stated otherwise. Cite this article:
Macron Stadium Facts for Kids. Kiddle Encyclopedia.