The Reid Park Zoo, founded in 1967, is a 24-acre (9.7 ha) city-owned and operated non-profit zoo located within Reid Park in Tucson, Arizona. The zoo features more than 500 animals. It was unofficially established in 1965 by Gene Reid, the parks and recreation director at the time. 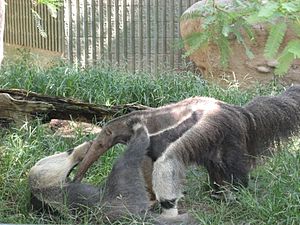 1965: A fledgling zoo was started by Gene Reid, then Parks & Recreation director, with exhibits of pheasants, peafowl, and guinea fowl just north of the present zoo site.

1966: Prairie dogs from Lubbock, Texas, were exhibited in “Prairie Dog Town” in the former “overlook” at Randolph Park. A 1.5 acre “collection of animals” become known as the “Randolph Park Children’s Zoo”. The first purchase of an “exotic” animal was made in the fall: a two-year-old male Asian elephant.

1967-1968: The first budget of $49,000 presented to and approved by Tucson City Council, effectively opening the zoo and making it part of city operations. New animal additions included alligator, bear, camel, leopard, primates, and tapir. The zoo’s name was changed to Randolph Park Zoo. A group called Friends of Gene Reid was informally organized to assist with everyday operations.

1973: The leopard exhibit was built with money collected at the admission gate.

1975: The polar bear exhibit was built. Dr. Ivo Poglayen became the second zoo administrator. A combination entrance/gift shop was constructed on the south border of the zoo.

1977: The African Veldt (zebra/ostrich area) exhibit was built and animals were purchased for it. The first and second classes of docents (volunteers) were organized and trained.

1978: The Asian Grasslands exhibit was constructed and opened. The zoo’s size expanded to 15 acres with the purchase of 2 acres on the east side. The zoo’s name was changed to Reid Park Zoo when the park’s name changed. Friends of Randolph Zoo Society, Inc. was incorporated as the Tucson Zoological Society.

1979: The health center and administration offices were constructed and opened.

1981: An entrance, gift shop, and snack bar were constructed at the north end of the zoo. The zoo’s size increased to 17 acres with acquisition of more land.

1982: The current snack bar was built and became operational. The waterfowl exhibit was constructed and opened in September. The former entrance/gift shop building on the south side of the zoo was remodeled into the zoo school and docent headquarters.

1983: The lion exhibit was constructed and opened in August.

1985: The tiger exhibit constructed and opened in September.

1990: The giraffe and polar bear exhibits were completed. Initial plans for the new South America Exhibit were drawn up by architects. The first executive director for TZS was hired in August.

1992: The former Asian Grassland area was converted into the new African Savanna, and new African species were introduced. The first “Festival of Lights” event was held.

1993: Extensive remodeling of the zoo school was completed. The first “ZOOcson” fundraiser event was held.

1994: Remodeling of the alligator exhibit began in March for a new caiman habitat.

1997: The South America Exhibit was completed.

2000: The lion-tail macaque exhibit was remodeled.

2003: The polar bear exhibit was expanded to include a natural substrate yard. New front gate project was completed.

2006: The giraffe feeding platform is completed.

2010: The Gift Shop is remodeled. Groundbreaking for the Expedition Tanzania expansion takes place.

2013: Jason Jacobs is named as the zoo’s fifth administrator. The polar bear and mandrill exhibits are remodeled to house grizzly bears and black-and-white lemurs respectively.

2014: A female African elephant calf was born in August, the first ever born in the State of Arizona.

Reid Park Zoo has the unique ability to treat animals with cancer using radiation therapy and heat therapy. Through a partnership with the University of Arizona Cancer Center, radiation oncologists can treat animals, such as a Galapagos tortoise in 1983, that are transported to the zoo from all over the country.

Early in 2006, a group of local activists named Save Tucson Elephants lobbied the city to move Reid Park Zoo's two elephants, Connie and Shaba, to a sanctuary in Tennessee. However, the city council decided instead to raise funds to build a new elephant enclosure, after receiving public petitions to keep the elephants in Tucson.

All content from Kiddle encyclopedia articles (including the article images and facts) can be freely used under Attribution-ShareAlike license, unless stated otherwise. Cite this article:
Reid Park Zoo Facts for Kids. Kiddle Encyclopedia.