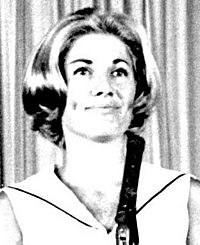 Rene Carpenter (April 12, 1928 – July 24, 2020) was an American newspaper columnist and television personality. She was the wife of Scott Carpenter, one of the Mercury Seven astronauts. She was part of the Astronaut Wives Club and was its last living member. She was born in Clinton, Iowa.

In 1968, she campaigned for Robert Kennedy. She had a syndicated women's page column, "A Woman, Still", and from 1972 to 1976, a television presenter, first with Everywoman, and then with Nine in the Morning. She worked for Committee for National Health Insurance.

Carpenter died on July 24, 2020, at a hospital in Denver from congestive heart failure, aged 92. She was the last surviving member of the Astronaut Wives Club, after Annie Glenn died two months earlier.

All content from Kiddle encyclopedia articles (including the article images and facts) can be freely used under Attribution-ShareAlike license, unless stated otherwise. Cite this article:
Rene Carpenter Facts for Kids. Kiddle Encyclopedia.