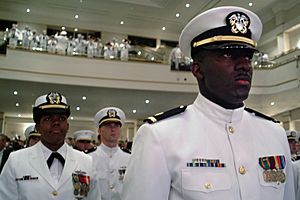 Newly graduated and commissioned officers of the Naval Reserve Officers Training Corps (NROTC) Unit Hampton Roads stand at attention as they are applauded during the spring Commissioning Ceremony in May 2004.

Reserve Officers' Training Corps is a type of military officer commissioning program, mostly in the United States. It is designed as a subject that students can choose to take at college. It focuses on leadership development, problem solving, strategic planning, and professional ethics. After joining the Reserve Officers' Training Corps, the person involved must be involved in the military for a period of time.

The U.S. Armed Forces and a number of other national militaries have ROTC programs. The Philippines established its program in 1912, with the creation of the first unit at the University of Santo Tomas during American colonial rule. ROTC in South Korea started in 1963; while China created its own program in 1997.

All content from Kiddle encyclopedia articles (including the article images and facts) can be freely used under Attribution-ShareAlike license, unless stated otherwise. Cite this article:
Reserve Officers' Training Corps Facts for Kids. Kiddle Encyclopedia.