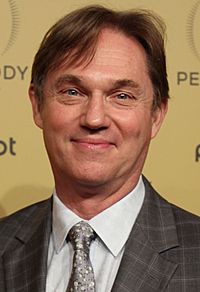 He is best known for his leading role as author John-Boy Walton in the CBS drama The Waltons, for which he won one Emmy Award and received nominations for another Emmy Award and two Golden Globe Awards.

All content from Kiddle encyclopedia articles (including the article images and facts) can be freely used under Attribution-ShareAlike license, unless stated otherwise. Cite this article:
Richard Thomas (actor) Facts for Kids. Kiddle Encyclopedia.