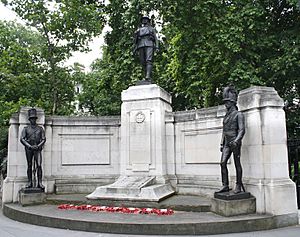 The design of the memorial was inspired by Colonel Willoughby Verner. Construction was funded by the Rifleman's Aid Society.

The memorial has a curved screen and central pylon of Portland stone, with three bronze statues by the Scottish artist John Tweed: on the pylon, a helmeted rifleman in First World War uniform marching with slung rifle (modelled on Rifleman Ephraim Alfred Dudley); and at ground level, in front of the screen to the left, a rifleman in 1806 pattern uniform with a Baker rifle, and, to the right, an officer with sword from 1800, when the Experimental Corps of Riflemen was formed.

The memorial was unveiled on 25 July 1925 by the Colonel-in-Chief of The Rifle Brigade, Field Marshal Prince Arthur, Duke of Connaught, and dedicated by the Chaplain-General to the Forces, Reverend Alfred Jarvis. The unveiling ceremony was accompanied by an honour guard from the 2nd Battalion, and another of veteran riflemen.

All content from Kiddle encyclopedia articles (including the article images and facts) can be freely used under Attribution-ShareAlike license, unless stated otherwise. Cite this article:
Rifle Brigade War Memorial Facts for Kids. Kiddle Encyclopedia.