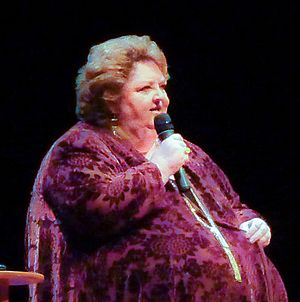 Rita MacNeil CM ONS (May 28, 1944 – April 16, 2013) was a Canadian country and folk singer. MacNeil was from the community of Big Pond on Nova Scotia's Cape Breton Island. Her biggest hit, "Flying On Your Own", was a crossover Top 40 hit in 1987 and was covered by Anne Murray the next year.

In 1990, MacNeil was the bestselling country artist in Canada, selling more records than even Garth Brooks and Clint Black. She was also the only female singer ever to have three separate albums chart in the same year in Australia.

On April 16, 2013, MacNeil died in Sydney, Nova Scotia, from problems caused by surgery after a repeated infection. She was 68.

All content from Kiddle encyclopedia articles (including the article images and facts) can be freely used under Attribution-ShareAlike license, unless stated otherwise. Cite this article:
Rita MacNeil Facts for Kids. Kiddle Encyclopedia.