Historic RittenhouseTown, sometimes referred to as Rittenhouse Historic District, encompasses the remains of an early industrial community which was the site of the first paper mill in British North America. The mill was built in 1690 by William Rittenhouse and his son Nicholas on the north bank of Paper Mill Run (Monoshone Creek) near (and now within) Philadelphia, Pennsylvania. The district, off Lincoln Drive near Wissahickon Avenue in Fairmount Park, includes six of up to forty-five original buildings. RittenhouseTown was listed on the National Register of Historic Places and was designated a National Historic Landmark District on April 27, 1992.

Flax was woven into linen in nearby Germantown. When the linen fabrics wore out, the rags were brought to RittenhouseTown to be made into paper. Paper produced at the Rittenhouse mill was sold to printers in Germantown, Philadelphia, and New York City. The Rittenhouse paper mill operated until about the 1850s, by which time the family was leasing its facilities out to other types of manufacturing.

Between the years 1890 and 1917, the site was acquired through donations and purchases by the City of Philadelphia's Fairmount Park Commission. A nonprofit organization called Historic RittenhouseTown, Inc. was founded in 1984 to preserve, restore, and historically interpret RittenhouseTown. The organization maintains offices within RittenhouseTown and offers historic tours, paper making workshops and special events.

Most of RittenhouseTown's buildings are built of stone and finished in stucco, and generally exhibit colonial building methods. They are all that are left of a much larger industrial complex and worker village, of which more than thirty-five buildings have been demolished. The area also includes archaeological industrial remains of some of the mill buildings. 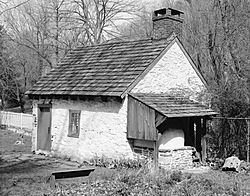 All content from Kiddle encyclopedia articles (including the article images and facts) can be freely used under Attribution-ShareAlike license, unless stated otherwise. Cite this article:
Historic RittenhouseTown Facts for Kids. Kiddle Encyclopedia.