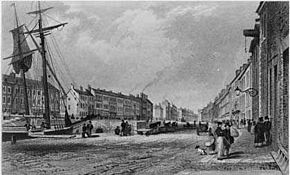 The River Farset (An Fhearsaid or Abhainn na Feirste in Irish) is a river in Belfast, Northern Ireland, which gave the city its name. It is a late tributary of the River Lagan.

It is on the County Antrim side of the Lagan and its entry to the Lagan is close to its outflow into Belfast Lough. The Farset is now contained within a tunnel under Belfast's High Street; a tunnel supposedly big enough to take a bus. 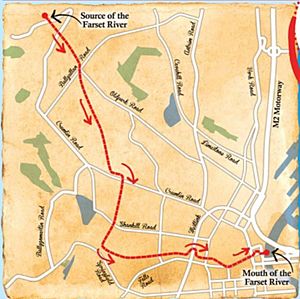 Course of the Farset river.

Belfast was founded at a sandy ford across the Farset, and this is the origin of the city's name - Béal Feirste, the Mouth of the Sandbar. Farset itself is derived from the Irish word meaning sandbar. The river flowed beside docks on High Street as Belfast grew in the 19th century.

In the 17th, 18th, and 19th centuries, the river was sometimes known as Belfast River, the River of Belfast, the Town River, or the High Street River. Over the course of the 18th century it was gradually covered over; the final section, close to Princes Street, was covered over in 1804.

All content from Kiddle encyclopedia articles (including the article images and facts) can be freely used under Attribution-ShareAlike license, unless stated otherwise. Cite this article:
River Farset Facts for Kids. Kiddle Encyclopedia.