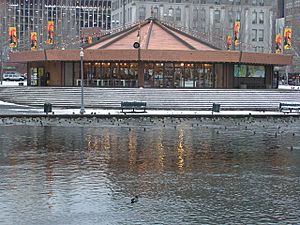 The Riverfront Park Carrousel, also known as the Looff Carrousel and the Natatorium Park Carousel, is a carousel in Spokane, Washington built in 1909 by Charles I. D. Looff as a gift for Looff's daughter Emma Vogel and her husband Louis Vogel, who owned Natatorium Park in Spokane. It was added to the National Register of Historic Places on September 19, 1977.

The carousel still contains its original 1900 Ruth & Sohn band organ, which plays 87 key B.A.B. rolls, although due to deteriorating player rolls, a digitized recording is played during the carousel's operation. The organ was manufactured in Waldkirch, Germany and imported by Looff around 1900.

The carousel contains 54 horses, one giraffe, one tiger, one goat and two chariots, all hand carved by Looff himself. It also has a ring dispenser, which allows the outside riders to grab a ring during each pass and then toss the ring at a clown with a hole for his mouth. If the rider is successful in capturing the brass ring, they can turn it in to win a free ride on the carousel. 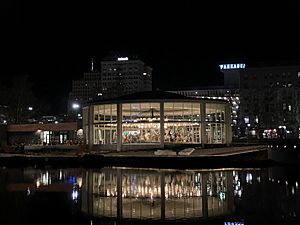 The building that currently houses the Carousel.

Since 1975, the carousel has been housed on the south bank of the Spokane River in Riverfront Park. The park was constructed for the 1974 World's Fair, and certain structures remained in the park after the fair closed. The building that hosted a German beer garden for the fair became the new home of the carousel in the summer of 1975. As a part of a bond passed in 2014 to revitalize Riverfront Park, a new building was designed to house the carousel. The new building was designed with more space to queue and host events, and large windows to improve views of the Spokane River from the inside and views of the carousel from the outside. The new space opened in 2018.

The carousel is currently closed due to the COVID-19 Pandemic.

The TV sitcom Frasier makes reference to the carousel, calling it simply "the Looff", in the season 9 episode "Frasier has Spokane".

All content from Kiddle encyclopedia articles (including the article images and facts) can be freely used under Attribution-ShareAlike license, unless stated otherwise. Cite this article:
Riverfront Park Carousel Facts for Kids. Kiddle Encyclopedia.