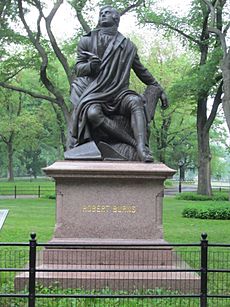 The statue in New York

The memorial sculpture in Manhattan's Central Park was cast c. 1880 and dedicated on 2 October 1880. It was the first statue of Burns to be erected outside Scotland and was a gift to the City of New York from Saint Andrew's Society of the State of New York and the Scottish-American community. For this sculpture Steell closely followed the portrait of Burns painted by Alexander Nasmyth in 1787. Seated on a tree stump with a quill pen in one hand, Burns looks up to heaven. He is thinking of his true love Mary Campbell, who died at an early age. It was to her that he had written the poem "To Mary in Heaven" inscribed on the scroll at his feet.

The Scottish and English statues 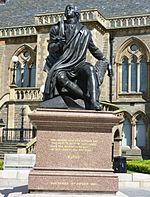 The statues in Dundee and London 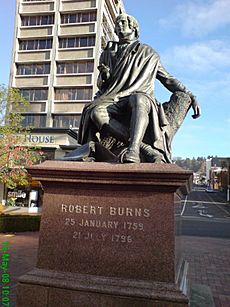 The statue in Dunedin

The Dunedin statue was the last of the set to be unveiled, on 24 May 1887. A statue of Burns was deemed relevant to the city, both because of the city's Scottish roots (it was founded by the Free Church of Scotland in 1848), and also because one of the city's founding fathers was Rev. Thomas Burns, a nephew of the poet.

In likeness, it is closest to the London statue. There had been discussion whether to place the statue in front of the railway station, but an elevated placement in The Octagon, the central plaza of Dunedin, was eventually chosen. The statue was unveiled by Miss Burns, a great-grand niece of Robert Burns. Speeches were given by former Governor and Premier of New Zealand Sir George Grey, and Richard Henry Leary, the Mayor of Dunedin.

All content from Kiddle encyclopedia articles (including the article images and facts) can be freely used under Attribution-ShareAlike license, unless stated otherwise. Cite this article:
Robert Burns (Steell) Facts for Kids. Kiddle Encyclopedia.