Much of the Coppermine Peninsula in the west of the island is made up by a perched strandflat surface that was in past at sea level.

Captain Richard Fildes may have named Robert Island for his brig Robert. Fildes was sealing in the South Shetlands in 1821–1822 until ice destroyed his vessel in March 1822. Fildes Strait is named for him. 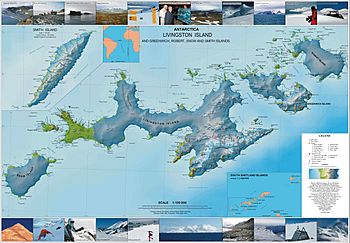 All content from Kiddle encyclopedia articles (including the article images and facts) can be freely used under Attribution-ShareAlike license, unless stated otherwise. Cite this article:
Robert Island Facts for Kids. Kiddle Encyclopedia.