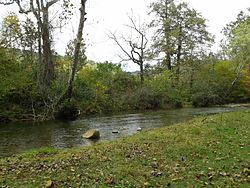 The Robinson River near Syria, Virginia

The Robinson River is a 34.2-mile-long (55.0 km) tributary of the Rapidan River in Madison County, Virginia, in the United States. It flows southeast through White Oak Canyon and Berry Hollow, under Routes 231, 29 and 15. From its start in Shenandoah National Park as Cedar Run and Negro Run, it has confluences with the Rose River, Quaker Run, Shotwell Run, Leathers Run, Mulatto Run, White Oak Run, Deep Run, Dark Run, Beaverdam Run and Great Run before its confluence with the Rapidan River. A 19-mile (31 km) section of the Robinson River from Syria to Locust Dale is Class II whitewater, with an average gradient of 15 feet per mile (2.8 m/km). In the Syria area, both the Rose River and Robinson River are stocked with Rainbow trout and Brook trout by the state of Virginia.

All content from Kiddle encyclopedia articles (including the article images and facts) can be freely used under Attribution-ShareAlike license, unless stated otherwise. Cite this article:
Robinson River (Virginia) Facts for Kids. Kiddle Encyclopedia.