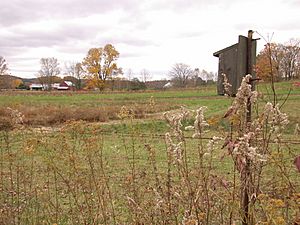 Rockbridge State Nature Preserve is a nature reserve featuring a natural bridge located in the unincorporated community of Rockbridge in Hocking County, Ohio, United States. It is part of the Hocking Hills region, but the sandstone that forms the natural bridge is located lower in the stratigraphic sequence than that which forms most of the region's notable features.

The preserve consists of 182 acres (0.74 km2) of land which borders the Hocking River and is connected to the trailhead via a narrow easement. The park's 2.75-mile (4.43 km) trail system includes two loop trails, one of which passes the natural bridge, while the other passes a rock shelter. Both formations are located a short distance from the Hocking River on small tributaries. The preserve was acquired by the state of Ohio in 1978.

The natural bridge is the largest of at least 12 natural bridges in the state of Ohio. It is approximately 100 feet (30 m) long, 10 to 20 feet (3.0 to 6.1 m) wide, and 3 feet (0.91 m) thick. It was formed when water eroded the softer layers of Mississippian Black Hand sandstone underneath the bridge. The nearby community of Rockbridge, Ohio is named after the formation.

All content from Kiddle encyclopedia articles (including the article images and facts) can be freely used under Attribution-ShareAlike license, unless stated otherwise. Cite this article:
Rockbridge State Nature Preserve Facts for Kids. Kiddle Encyclopedia.