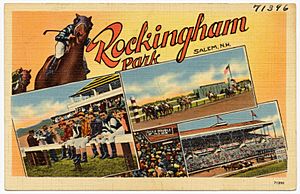 The New Hampshire Sweepstakes (now New Hampshire Lottery) was originated in 1964 and raced here from 1964 to 1967. The race was brought back in 1984 (though not connected with sweepstakes tickets) and was the feature event of the summer racing meet.

In 1991, the Mall at Rockingham Park, currently the largest mall in northern New England, was constructed adjacent to the racetrack, and has Dick’s Sporting Goods, Sears, J. C. Penney, Macy's (originally Jordan Marsh), and Lord & Taylor for anchors. The mall is owned and managed by Simon Property Group and is not affiliated with the racetrack.

"The Finest Racecourse in the World"

On June 28, 1906, a tiny outpost near the Salem train depot began a 21-day tenure as host to a Thoroughbred meet. Over 10,000 people from as far away as New York City flocked to the small New Hampshire town. Their rave reviews proclaimed the site "the finest racecourse in the world". Although Alyth, a two-year-old, won the first thoroughbred race at the site, gambling was still illegal at the time in New Hampshire, and betting was shut down after three days. Underground wagering continued throughout the meet, but the track sat idle for five years after the meet's conclusion; however, these humble beginnings would lead to the formation of a staple of New England culture rich with the history of the "sport of kings."

In between its stints as a racecourse, the site served as host to a number of historical occurrences. Before the return of racing, Rockingham Park hosted the first aviation meet in northern New England in 1911, where Lieutenant Milling set a new altitude record of 1,600 feet (490 m) in his biplane.

The track also served as the base for the 14th US Army Corps of Engineers during World War I. The racecourse served as a bivouac for soldiers prior to voyages to France.

The racetrack was idled again when on July 29, 1980 a fire destroyed the grandstand. The track remained closed until May 26, 1984.

All content from Kiddle encyclopedia articles (including the article images and facts) can be freely used under Attribution-ShareAlike license, unless stated otherwise. Cite this article:
Rockingham Park Facts for Kids. Kiddle Encyclopedia.