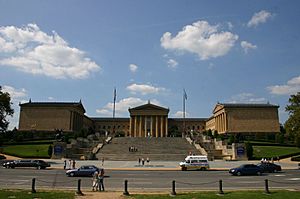 The front entrance and steps to the Philadelphia Museum of Art 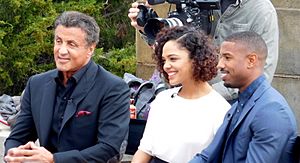 Sylvester Stallone, Tessa Thompson, and Michael B. Jordan promoting Creed atop the Rocky Steps in November 2015.

The 72 stone steps leading up to the entrance of the Philadelphia Museum of Art, in Philadelphia, Pennsylvania, have become known as the "Rocky Steps" as a result of a scene from the film Rocky. Tourists often mimic Rocky's famous climb, a metaphor for an underdog or an everyman rising to a challenge. A bronze Rocky statue was briefly situated at the top of the steps for the filming of Rocky III. This statue, now located at the bottom right of the steps, is a popular photo opportunity for visitors. The top of the steps offers a commanding view of Eakins Oval, the Benjamin Franklin Parkway, and Philadelphia City Hall.

In 2006, Rocky creator Sylvester Stallone recounted the genesis of the iconic scene: (while filming the 1976 movie) the film crew, bound by a tight budget, identified the steps one night while searching for filming locations around the city. Stallone first thought Rocky should carry his dog Butkus up the steps, but the big bull mastiff proved too heavy for the scene to work. Still, the view from the top of the stairs inspired him to reshoot the scene without the dog. Also in Rocky Balboa, Rocky lifts his dog Punchy when he reaches the top of the steps. The closing credits of Rocky Balboa show a montage of dozens of people running up the steps.

This scene was one of the first uses in a major film of the Steadicam, a stabilized camera mount that allows its operator to walk and even climb steps while smoothly filming. 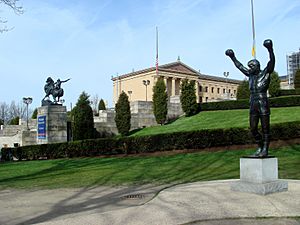 The Rocky statue, situated just northeast of the steps 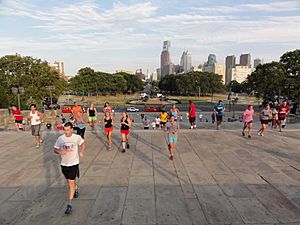 View of the Ben Franklin Parkway and Philadelphia skyline with runners making the iconic climb up the steps.

Before Rocky III, released in 1982, Stallone commissioned A. Thomas Schomberg to create a bronze statue of Rocky. Three 2-ton, 10-foot-tall copies were to be cast. One was installed atop the steps for the filming of Rocky III, and was ultimately relocated to the bottom of the steps. The second Rocky was in the San Diego Hall of Champions Sports Museum in San Diego, California, until it closed in 2017. The statue was then put up for auction and purchased by an anonymous buyer who was later revealed to be Sylvester Stallone himself.

In 2006, Schomberg realized the casting mold for the statue was beginning to decay, and the third and final edition of the statue was cast in bronze and put up for auction on eBay three separate times between 2002–2005, with a starting bid of US$5,000,000, then US$3,000,000, and finally US$1,000,000 to raise funds for the International Institute for Sport and Olympic History. It is currently exhibited at the Schomberg Studios Gallery in Denver, Colorado

After filming was complete, a debate arose between the Art Museum and Philadelphia's Art Commission over the meaning of "art". City officials, who argued that the Rocky statue was not "art" but a "movie prop", eventually moved it to the front of the Philadelphia Spectrum.

It was later returned to the Art Museum for the filming of Rocky V, then brought back to the Spectrum. The statue was replaced with a bronze inlay of Converse sneaker footprints with the name "Rocky" above them.

On September 8, 2006, the Rocky statue was returned to the Art Museum and placed on a pedestal in a grassy area near the foot of the steps to the right of the Museum. The unveiling ceremony included live music, the debut of the first full trailer for Rocky Balboa, and a free showing of the first Rocky movie. At the ceremony, Philadelphia Mayor John Street said that the steps were one of Philly's biggest tourist attractions, and that Stallone, a native New Yorker, had become "the city's favorite adopted son".

All content from Kiddle encyclopedia articles (including the article images and facts) can be freely used under Attribution-ShareAlike license, unless stated otherwise. Cite this article:
Rocky Steps Facts for Kids. Kiddle Encyclopedia.