Rodborough is a civil parish in the district of Stroud, Gloucestershire, in South West England. It is directly south of the town of Stroud, north of the town of Nailsworth and north-west of the village of Minchinhampton. The parish includes the settlements of Bagpath (not to be confused with Bagpath in the Ozleworth valley), Butterrow, Kingscourt, Lightpill and Rooksmoor, and is adjacent to the Stroud suburb of Dudbridge. The population taken at the 2011 census was 5,334. 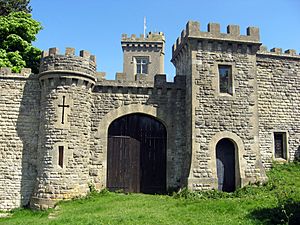 An entrance to Rodborough Fort

Built on a hill, Rodborough village is near Rodborough Common, a public recreation area popular with walkers. Most of the common land was donated to the National Trust in 1937 by Thomas Bainbrigge Fletcher (1878–1950), an entomologist. It is little known that this was dependent on a subscription fund of £700 being raised to pay for the maintenance and upkeep of the common. On the common is Rodborough Fort, a folly built in 1761 that is now a private house.

Rodborough Common is a Site of Special Scientific Interest.

The parish has two primary schools, several public houses, a large hotel called The Bear of Rodborough Hotel and a community hall. It is home to the historic Winstones Ice Cream Factory. It has a large and active Christian community who attend the Church of England parish church of St. Mary Magdalene or Rodborough Tabernacle United Reformed Church, and its various clubs and societies include a football club, a Scout group and a mother and toddler network.

The local newspaper is the Stroud News & Journal and the parish council also produces a quarterly newsletter called The Commoner.

For children there are several playgrounds in Rodborough and the community hall hosts a youth club every Friday night.

An electoral ward in the same name exists. All of this ward is within the civil parish and a reduced population therefore applies: at the 2011 Census it was 4,543.

All content from Kiddle encyclopedia articles (including the article images and facts) can be freely used under Attribution-ShareAlike license, unless stated otherwise. Cite this article:
Rodborough Facts for Kids. Kiddle Encyclopedia.