Nailsworth is a town and civil parish in Gloucestershire, England, lying, in one of the Stroud Valleys in the Cotswolds, on the A46 road. It had a population of 5,800 at the 2011 census, and lies 4 miles (7 km) south of Stroud.

In ancient times Nailsworth was a settlement at the confluence of the Avening Valley and the Woodchester Valley, on the Nailsworth Stream. Among many notable historic medieval buildings in the area are Beverston Castle and Owlpen Manor.

In the modern era Nailsworth was a small mill town and centre for brewing. It was connected directly to the UK national rail network between 1867 and 1947 with a station that was the terminus of the Stonehouse and Nailsworth Railway. The River Frome, which runs through the town, was also the site of an important trout fishery.

These days Nailsworth is visited in the summer by walkers. It holds a farmers' market every fourth Saturday in the month. Local events such as the market and the Nailsworth Festival are announced by the town crier.

Over the past decade the small town centre has been reinvigorated. Besides numerous restaurants and cafes, it now contains a number of shops, including bakers, a delicatessen with a fishmonger, one hardware store, butchers, craft shops, bookshops, art galleries and a gardening shop. Nailsworth is a Fairtrade Town and is twinned with the French village of Lèves, with which it enjoys an exchange visit in alternating years. 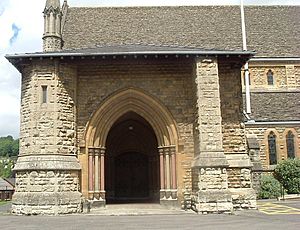 The entrance to St. George's Church

Built on the higher ground at the centre of town, St. George's was consecrated in November 1900. It can seat 500 and was designed in the Early English style by M. H. Medland of Gloucester. A lack of funds, however, meant that the church originally consisted only of a nave, aisles and south porch, without any chancel or tower. The chancel, Lady Chapel and vestries, dedicated to the memory of those who died in World War I, were added in 1939. A church tower was never added. In 1980 a large extension to the vestries was accomplished, in the form of a Parish Room. The church has no churchyard.

Three of the stained glass windows in the south aisle, depicting St. Luke, St. Paul and St. Barnabas, are by Charles Eamer Kempe. Three others depict St. Richard of Chichester, St George and St Martin. The other window is by Herbert Bryans and shows the prophetess Anna. The East window was designed by Peter Strong and was installed in 1977. On the West wall is a mural, painted by Sir Oliver Heywood in 1985, showing depicting community life in the town. 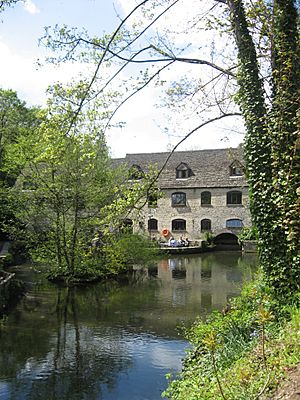 The Baptist chapel at Shortwood was rebuilt in 1837. In spite of the emigration of over 80 members to Adelaide between 1838 and 1840, the adult congregation was at least 1,000 in 1851. In 1864 a dispute over a new minister led to the secession of some members, who built their own chapel, opened in 1868, on Bristol Road; this was known as the Nailsworth Tabernacle Church. In 1910 the community rejoined the original Baptist church.

In 1967 the Shortwood congregation united with the Forest Green Congregationalists to form a new church called Christ Church, Nailsworth. Services alternated for a few years with the Lower Forest Green Chapel, but the chapel on Newmarket Road, after modernisation, became the permanent place of worship in 1972. In that year Christ Church became a member of the new United Reformed Church, although retaining its links with the Baptist Union. It had a membership of 147 in 1973.

Forest Green Rovers are the biggest football club playing in Nailsworth and currently play in the Conference National, one level below the Football League, at The New Lawn stadium. The town also has another Non-League football club Shortwood United F.C. who play at The Meadowbank Ground.

Every spring, the town hosts the Nailsworth Festival during which local artists exhibit in the windows of all the high street shops, there are numerous cultural and street events, and a free music festival, Nailstock, takes place on one of the playing fields in the town, showcasing local bands.

The tune "Forest Green" used for the carol O Little Town of Bethlehem was collected by Ralph Vaughan Williams in the area in 1903.

All content from Kiddle encyclopedia articles (including the article images and facts) can be freely used under Attribution-ShareAlike license, unless stated otherwise. Cite this article:
Nailsworth Facts for Kids. Kiddle Encyclopedia.