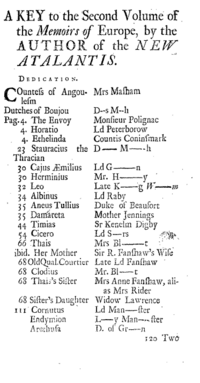 Authors usually write these types of stories (instead of telling the whole truth) to talk about a controversy or what happened during a crime so that the people involved can't sue them. A couple of movies that are written like this are Citizen Kane (a movie about a man a lot like William Randolph Hearst) and Dreamgirls (a movie about a Motown group a lot like The Supremes).

Because it comes from French, the plural of roman à clef is romans à clef.

All content from Kiddle encyclopedia articles (including the article images and facts) can be freely used under Attribution-ShareAlike license, unless stated otherwise. Cite this article:
Roman à clef Facts for Kids. Kiddle Encyclopedia.