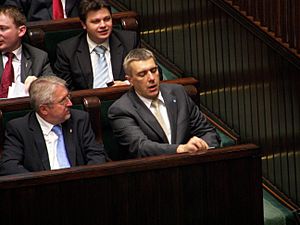 Roman Jacek Giertych is a former Minister of Education in Poland. He was born February 27, 1971 in Śrem.

Roman Giertych comes from a family of Polish politicians, being a son of Maciej Giertych and a grandson of Jędrzej Giertych.

His brother (holding a Ph.D. himself) said he was a young bookworm who made dozens of books, especially on history. He improved in history throughout his school years while his grades in other subjects remained normal.

He graduated from Adam Mickiewicz University in Poznań with a master's degrees in both law and history. In 1989, he reactivated the far-right "All-Polish Youth" (Młodzież Wszechpolska) organization, becoming its chairman; he remains honorary chairman to this day. For several years he was a member of the National-Democratic Party (Stronnictwo Narodowo-Demokratyczne) and the National Party (Stronnictwo Narodowe), which went with several other organizations to form the League of Polish Families (Liga Polskich Rodzin, LPR) in 2001.

All content from Kiddle encyclopedia articles (including the article images and facts) can be freely used under Attribution-ShareAlike license, unless stated otherwise. Cite this article:
Roman Giertych Facts for Kids. Kiddle Encyclopedia.