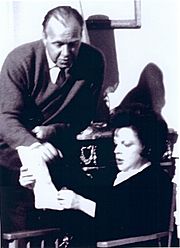 Ronald Elwin Neame (23 April 1911 – 16 June 2010) was an English movie director and producer, screenwriter, and cinematographer who is known for his works in The Poseidon Adventures, Great Expectations, Oliver Twist, Brief Encounter, and In Which We Serve.

Neame was born on 23 April 1911 in London, England. He studied at University College School and at Hurstpierpoint College. Neame was married to Beryl Heanly from 1933 until they divorced in 1992. Then he was married to Donna Friedberg from 1993 until his death. With Heanly he had a son, Christopher. Neame also had three grandchildren. Neame died on June 16, 2010 in Los Angeles, California from complications of an accidental fall, aged 99.

All content from Kiddle encyclopedia articles (including the article images and facts) can be freely used under Attribution-ShareAlike license, unless stated otherwise. Cite this article:
Ronald Neame Facts for Kids. Kiddle Encyclopedia.