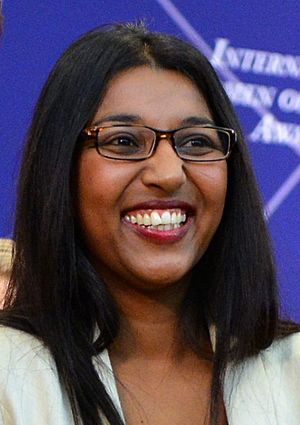 Roshika Deo (born December 12, 1980) is a Fijian politician and activist. Deo started the Be The Change Campaign organization in Fiji. The organization supports feminism, human rights, and environmentalism.

Deo was a candidate for the Fiji National Elections in September 2014. She was the first to put her name on the official list of people trying to be elected. Many members of the FijiFirst and SODELPA parties, as well as members of Methodist Church in Fiji criticized Deo. It was difficult for Deo to get enough signatures of support to officially become a candidate..

Deo received the New Zealand Defender of Human Rights award in 2013. In 2014, she received the International Women of Courage Award.

Roshika Deo's family is Indo-Fijian and Hindu. Her father, Indar Deo, was a well-known lawyer, a politician for the National Alliance Party of Fiji, and a businessman. He lives in Australia. Deo has three brothers and one sister.

All content from Kiddle encyclopedia articles (including the article images and facts) can be freely used under Attribution-ShareAlike license, unless stated otherwise. Cite this article:
Roshika Deo Facts for Kids. Kiddle Encyclopedia.