Rothschild Island is a black rugged island 39 kilometres (24 mi) long, mainly ice covered but surmounted by prominent peaks of Desko Mountains in Antarctica, 8 kilometres (5 mi) west of the north part of Alexander Island in the north entrance to Wilkins Sound.

The island was sighted from a distance by the French Antarctic Expedition (c1908-1910), and named by Charcot in honour of Baron Edouard de Rothschild (1868-1949), head of the Rothschild banking family of France and president of de Rothschild Frères.

In the subsequent explorations of the area by the British Graham Land Expedition (BGLE) (c1934-1937) the feature was believed to be a mountain connected to Alexander Island. Geologically this might be true—but it has not been proven by any means due to a lack of anything like a complete geological survey of the region.

However Rothschild Island's insularity was reaffirmed by the United States Antarctic Service (USAS, c1939-1941) who photographed and roughly mapped the island from the air. 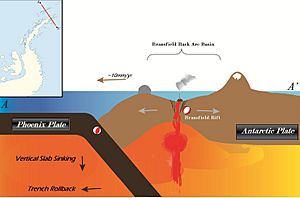 Rothschild Island was mapped in detail from air photos taken by the Ronne Antarctic Research Expedition (RARE c1947-1948) and by Searle of the Falkland Islands Dependencies Survey (FIDS) in 1960, and from US governmental satellite imagery taken in 1974.

Although this very remote part of the world has never been inhabited and is protected by the Antarctic Treaty System, which bans industrial development, waste disposal and nuclear testing, there is still a threat to these fragile ecosystems from increasing tourism, primarily on cruises across the Southern Ocean from the port of Ushuaia, Argentina.

All content from Kiddle encyclopedia articles (including the article images and facts) can be freely used under Attribution-ShareAlike license, unless stated otherwise. Cite this article:
Rothschild Island Facts for Kids. Kiddle Encyclopedia.