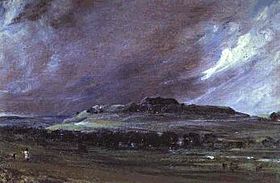 Old Sarum in Wiltshire, an uninhabited hill which until 1832 elected two Members of Parliament. Painting by John Constable, 1829

A rotten borough, was a type of parliamentary borough in the UK, before the Reform Act 1832.

It had a very small electorate and could be used by its "owner" or patron to get a seat in Parliament in the House of Commons without any opposition. The same terms were used for similar boroughs in the 18th-century Parliament of Ireland.

Old Sarum in Wiltshire (pictured) was the most notorious pocket borough. It was owned by the Pitt family from the mid-17th century until 1802. One of its Members of Parliament was Prime Minister William Pitt the Elder. In 1802 the Pitt family sold it for £60,000, much more than the land itself was worth.

An even more striking example was Charles Howard, 11th Duke of Norfolk, who controlled eleven boroughs. The Reform Act of 1832 put an end to this sort of thing.

All content from Kiddle encyclopedia articles (including the article images and facts) can be freely used under Attribution-ShareAlike license, unless stated otherwise. Cite this article:
Rotten borough Facts for Kids. Kiddle Encyclopedia.