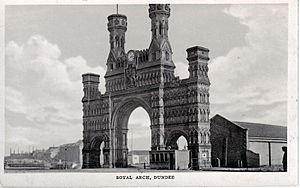 The Royal Arch or Victoria Arch was a structure erected in Dundee, Scotland, between 1849 and 1853 and demolished in 1964. The monumental archway formerly stood over the access to the pier between Earl Grey Dock and King William IV Dock on the city's waterfront.

The arch was built to commemorate a prior visit to the city by Queen Victoria and her husband, Prince Albert, in 1844. Victoria and Albert were on a visit to Duke of Atholl and his nephew, Lord Glenlyon. The Royal boat landed at the Royal Arch and the couple returned and embarked for London on 1 October 1844. This was the first visit by a British monarch to Dundee since the 17th century, although Victoria often visited the city as it was on her route to Balmoral Castle.

An earlier arch, designed by harbour engineer James Leslie, was made out of wood. Following a design competition for a more permanent structure, John Thomas Rochead, designer of the Wallace Monument near Stirling, was commissioned to design a permanent sandstone monument to replace the wooden arch. The Royal Arch, commonly known in Dundee as the Victoria Arch, was described as being in the "Anglo-Norman" style and consisted of a large triumphal arch, flanked by two smaller side arches, surmounted by two central turrets. It was 80 feet across. Costing somewhere between £2,270.00 and £3,000.00, it was mostly funded by public subscription and harbour trustees. It was situated between King William IV Dock and Earl Grey Dock on the south side of Dock Street between the junctions of Castle Street, and Whitehall Crescent.

The Arch was demolished on 16 March 1964, as part of land reclamation work required for the construction of the Tay Road Bridge. The arch was dynamited, and the rubble deposited in both the King William IV and the Earl Grey Docks. Afterwards, these docks were land-filled to accommodate the slip roads for the new road bridge.

Fragments of the arch were uncovered while the waterfront was being redeveloped in 2010, and its foundations were uncovered in 2014. In 2015, a petition was launched to build a replica of the arch. The Dundee City Council has stated that they "could never have rebuilt something like [the Royal Arch]", but granite paving slabs were put on the site of the arch, and four trees were planted nearby to commemorate the landmark.

All content from Kiddle encyclopedia articles (including the article images and facts) can be freely used under Attribution-ShareAlike license, unless stated otherwise. Cite this article:
Royal Arch (structure) Facts for Kids. Kiddle Encyclopedia.