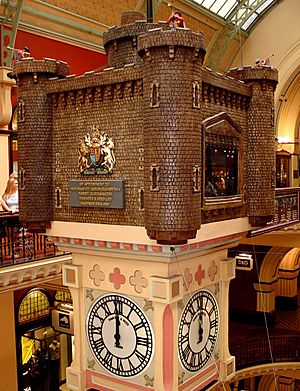 The Royal Clock in the Queen Victoria Building, Sydney, Australia.

The "Royal Clock" is located on the upper level of the southern half of the Queen Victoria Building in Sydney, Australia. It was designed by Neil Glasser and made by Thwaites & Reed of Hastings in England, and when activated, displays scenes of English royalty. The plaque on the side of the clock reads "By appointment to Her Majesty Queen Elizabeth II. Turret Clockmakers Thwaites & Reed Ltd Hastings England".

The clock activates on the hour from 9 am until 9 pm. Each performance begins with the music of the trumpet voluntary as miniature trumpeters emerge from the tops of each of the clock's four outer turrets. The trumpeters withdraw at the end of the voluntary. The six scenes are viewed (one at a time) through windows on both sides of the clock that face the railed walkways. Each scene briefly illuminates to display a diorama of English royal history, before dimming and rotating to the left in preparation for the next scene. Most of the scenes include mechanical animation. One of these for example, depicts the execution of King Charles I.

The Royal Clock's performance is accompanied by music written by Jeremiah Clarke called The Prince of Denmark's March (commonly known as the Trumpet Voluntary).

All content from Kiddle encyclopedia articles (including the article images and facts) can be freely used under Attribution-ShareAlike license, unless stated otherwise. Cite this article:
Royal Clock Facts for Kids. Kiddle Encyclopedia.