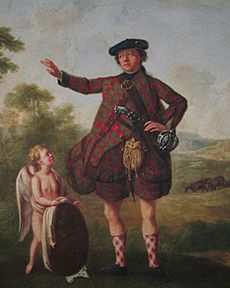 Detail of painting of Dr Sir Stuart Threipland, of Fingask (1716-1805); Bonnie Prince Charlie's physician during the Rising, and President of the Royal Medical Society (1766-1770).

Royal Medical Society (RMS) is the oldest medical society in the United Kingdom.

The RMS is a British professional society engaged in the moving forward of medical knowledge.

It was called "the Medical Society" when it was established in 1737. The Society was granted a Royal Charter in 1778.

RMS is based in Edinburgh, Scotland. The society has members throughout the world.

All content from Kiddle encyclopedia articles (including the article images and facts) can be freely used under Attribution-ShareAlike license, unless stated otherwise. Cite this article:
Royal Medical Society Facts for Kids. Kiddle Encyclopedia.