Royalton is a village in Franklin County, Illinois, United States. The population was 1,151 at the 2010 census.

According to the original surveys of Illinois, in the early 19th century the Lusk's Ferry Road ran through the middle of what is now Royalton, heading on a diagonal line toward the southeast. The Lusk's Ferry Road was an important early road connecting Fort Kaskaskia with Lusk's Ferry on the Ohio River. No trace of this road remains near Royalton. It is not clear whether the road figured in the early history of the town, or if it was long forgotten before Royalton came into existence.

Royalton was established in 1907.

On October 22, 1914, an explosion in the North Mine of the Franklin Coal & Coke Company killed 51 miners. This was the worst mine disaster to date in the coal fields of southern Illinois.

There were 516 households, out of which 26.9% had children under the age of 18 living with them, 45.0% were married couples living together, 12.4% had a female householder with no husband present, and 39.1% were non-families. 35.5% of all households were made up of individuals, and 19.6% had someone living alone who was 65 years of age or older. The average household size was 2.19 and the average family size was 2.81. 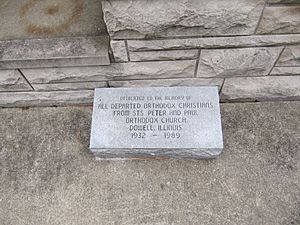 Royalton is home to the only Russian Orthodox church in southern Illinois, The Protection of the Holy Virgin Mary Orthodox Church. The church was founded by eastern European immigrants, including Rusyns, many of whom worked in local coal mines The three principal founders were Frank Derbak, John August and Paul Andrews. The church opened to parishioners in late 1914.

At one time, there was a Russian Orthodox church in nearby Dowell, but it has closed. A memorial to the Dowell church is located in Royalton.

All content from Kiddle encyclopedia articles (including the article images and facts) can be freely used under Attribution-ShareAlike license, unless stated otherwise. Cite this article:
Royalton, Illinois Facts for Kids. Kiddle Encyclopedia.