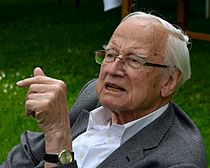 Rudolf Zahradník (October 20, 1928 – October 31, 2020) was a Czech chemist. He was born in Bratislava, then Czechoslovakia, now Slovakia. He studied the relationship between theoretical and experimental characteristics. From 1993 to 2001 he was president of the Czech Academy of Sciences and in 1994 became founding chairman of the Learned Society of the Czech Republic.

All content from Kiddle encyclopedia articles (including the article images and facts) can be freely used under Attribution-ShareAlike license, unless stated otherwise. Cite this article:
Rudolf Zahradník Facts for Kids. Kiddle Encyclopedia.