Rugby Chapel built in 1912 with funds raised by the students in Rugby School in England, served as the major place of worship for Emmanuel College, until the opening of St. Chad's Chapel in 1966, and still serves as a place of education and worship.

A wooden version of an English Stone-built church, the chapel has a wooden vault support structure, gothic windows and a Norman tower over the porch.

Rugby Chapel is a symbol of the importance of the Anglican Church and the British people in the early development of the West and of the contribution made by Emmanuel College (now the College of Emmanuel and St. Chad) to theological education in Western Canada. 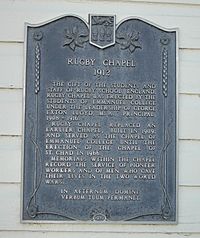 The gift of the students and staff of Rugby School, England, Rugby Chapel was erected by the students of Emmanuel College under the leadership of George Exton Lloyd, M.A., Principal, 1908-1916.

Rugby Chapel replaced an earlier chapel, built in 1909, and served as the chapel of Emmanuel College until the erection of the Chapel of St. Chad in 1966.

Memorials within the Chapel record the service of pioneer workers and of men who gave their lives in the two world wars.

All content from Kiddle encyclopedia articles (including the article images and facts) can be freely used under Attribution-ShareAlike license, unless stated otherwise. Cite this article:
Rugby Chapel Facts for Kids. Kiddle Encyclopedia.