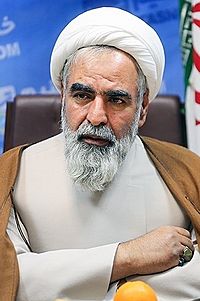 He was in the Iranian Ministry of Intelligence and National Security (or VEVAK) as deputy to Ali Fallahian and in April 2007 was appointed by President Mahmoud Ahmadinejad as the security advisor to the president.

Hosseinian died on August 25, 2020, after he had a history of heart problems.

All content from Kiddle encyclopedia articles (including the article images and facts) can be freely used under Attribution-ShareAlike license, unless stated otherwise. Cite this article:
Ruhollah Hosseinian Facts for Kids. Kiddle Encyclopedia.