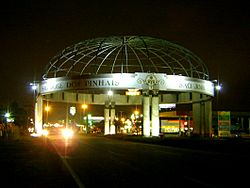 Portal of the city, on the border with Curitiba.

São José dos Pinhais is a Brazilian city, the second largest in the Greater Curitiba, in southern state of Paraná. In 2008 the population was more than 280.000 inhabitants.

It is the third largest automotive pole of Brazil, housing assembly of Volkswagen, Audi, Nissan and Renault. The city is also home of the Afonso Pena International Airport, the main airport in southern Brazil.

All content from Kiddle encyclopedia articles (including the article images and facts) can be freely used under Attribution-ShareAlike license, unless stated otherwise. Cite this article:
São José dos Pinhais Facts for Kids. Kiddle Encyclopedia.