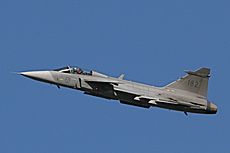 The Saab JAS 39 Gripen is a fourth-generation fighter aircraft.

It was created by Saab, a Swedish aerospace company, for use in the Swedish Air Force. The decision for a new aircraft system was made by the Minister of Defence, Torsten Gustafsson. It was approved by Parliament in 1982.

The Gripen is one of the first multi-role combat aircraft that can be used for fighter, attack and reconnaissance missions as well as switching between them during flight, hence the name of the JAS 39. ‘J’ stands for the initial of the Swedish language word for "Hunting", meaning attack against air targets, "attack" to attack ground and sea targets, and ‘S’ stands for the Swedish word for "reconnaissance", to take photos and films. The name Gripen is the result of a contest held in the early 1980s, and means ‘griffin’.

The Gripen aircraft fighter system has for years been the backbone in the Swedish air force. Recently the Swedish government decided to acquire the latest version of the system, Gripen E, and Saab signed an agreement with the Swedish Defence Material Administration about development and modification of Gripen E.

All content from Kiddle encyclopedia articles (including the article images and facts) can be freely used under Attribution-ShareAlike license, unless stated otherwise. Cite this article:
Saab JAS 39 Gripen Facts for Kids. Kiddle Encyclopedia.