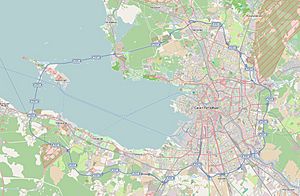 The Ring Road on a map of Saint Petersburg. 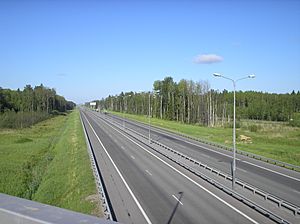 The Ring Road at the 8-km mark, in the vicinity of Gorskaya and the Gulf of Finland. 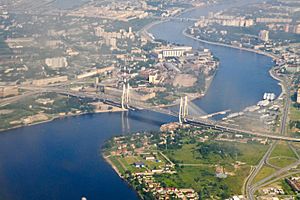 The Bolshoy Obukhovsky Bridge, the only non-bascule bridge over the Neva River among the bridges of Saint Petersburg

The Saint Petersburg Ring Road is a 142 km (88 mile) orbital freeway encircling Saint Petersburg, Russia. The city's only beltway, it is listed in the Russian road numbering system as federal public highway A-118.

The need for the construction of a beltway around St Petersburg was first stated in the 1965 General Development Plan of Leningrad. The western segment of the road was planned to be constructed as a causeway forming part of a proposed flood-protection dam in the Gulf of Finland. In late 1979, construction of the dam facilities commenced and by the early 1990s a two-lane road connected the northern shore of the Gulf of Finland with the city of Kronstadt on Kotlin Island. However, lack of financing in the midst of economic turmoil in Russia halted further development of both the dam and the Ring Road project in 1992.

An interchange junction near the international Pulkovo Airport was opened in November 2007. By this time, construction of the Ring Road was resulting in a significant boost in land values in the vicinity of the highway and its interchanges.

The south-western and western sections of the Ring Road, including the dam facilities and the intersection with the E-20/A-180 route, were gradually constructed throughout the late 2000s. The six-lane causeway across the Gulf of Finland includes bridges, trestles, man-made islands, and a tunnel under the main shipping channel. After more than two decades of construction, the completed Ring Road was officially opened on 12 August 2011 by the Russian Prime Minister, Vladimir Putin, and the Governor of St Petersburg, Valentina Matvienko, who inaugurated the dam facilities. The St. Petersburg Ring Road was notorious for the delays and budget overspending during its construction.

All content from Kiddle encyclopedia articles (including the article images and facts) can be freely used under Attribution-ShareAlike license, unless stated otherwise. Cite this article:
Saint Petersburg Ring Road Facts for Kids. Kiddle Encyclopedia.