Saint Philip is a parish of Barbados at the easternmost end of the island. Saint Philip’s Parish Church was built as the Anglican parish church in 1640.

Six Cross Roads, or locally known as just Six Roads, is a roundabout and its immediate neighborhood of which six roads converge extended in from the west 'from city' (Bridgetown); north-west toward Four Cross Roads and St. George; north-east toward Bushy Park; east toward Bayfield; south-east toward The Crane; south-west toward Oistins. Though there are a few areas in Barbados known as 'Four Cross Roads' there is only one area known as 'Six Cross Roads'. This parish is home to the only 'dependency' of Barbados called Culpepper Island. This tiny rock in the ocean is used as a feeding ground for sheep but cannot be reached unless by boat or by foot at low tide. The parish of Saint Philip is the main on-shore area of Barbados involved in the local oil industry.

St. Philip is well-known on the local music and entertainment scene for producing entertainers. Well-known calypsonians and performers Red Plastic Bag, John King, Ronnie D. and Lil Rick all hail from this eastern parish. It was also the first parish to have its own carnival - The St. Philip Carnival. A 2020 song by calypsonian Ronnie D called the 'St Philip Anthem' honours the parish. 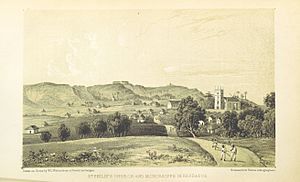 St.Philip's church and Moncreiffe in Barbados, 1848

All content from Kiddle encyclopedia articles (including the article images and facts) can be freely used under Attribution-ShareAlike license, unless stated otherwise. Cite this article:
Saint Philip, Barbados Facts for Kids. Kiddle Encyclopedia.