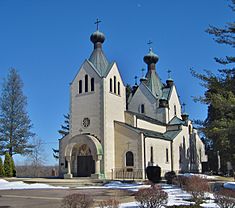 The monastery church of Saint Sava

The Saint Sava Serbian Orthodox Monastery and School of Theology (Serbian: Манастир Светог Саве у Либертивилу) in Libertyville, Illinois is a monastery and professional theological school in the Serbian Orthodox Church in the USA and Canada. The school is a collocated facility with the monastery.

The school possesses a library of 8,000 titles.

The monastery was founded in 1923 by Montenegrin Serb Bishop Saint Mardarije as a school for the Serbian Orthodox Church. It is unique in North America among Orthodox seminaries for being linked to and deriving its traditional Orthodox ethos from a monastery out of which it grew.

Dionisije Milivojević was appointed the bishop of the American-Canadian Diocese in 1939. During World War II, the Libertyville monastery became an American refuge for Orthodox Serbs. In 1964, Serbian Patriarch German defrocked American Bishop Dionisije Milivojević over political and administrative issues. This forced a split between the Serbian and North American branches of the church. The result was two separate North American churches—the Serbian Orthodox Church in the USA and Canada in Libertyville and the Diocese of New Gracanica – Midwestern America in nearby Third Lake. The Illinois Supreme Court deemed that this schism was a violation of the mother church's regulations and forbade recognition of Bishop Dionisije. However, in 1976, the United States Supreme Court ruled that this was in violation of the First and Fourteenth Amendment to the United States Constitution in Serbian Orthodox Diocese v. Milivojevich.

Peter II of Yugoslavia, the last Yugoslav king, lived at the monastery after being exiled by Josip Broz Tito. He died at the church in 1970 and his will stipulated that he wished to be buried there. More than 10,000 attended his funeral. He lay there until his remains were repatriated to Serbia in 2013.

The property is listed on the National Register of Historic Places.

All content from Kiddle encyclopedia articles (including the article images and facts) can be freely used under Attribution-ShareAlike license, unless stated otherwise. Cite this article:
Saint Sava Serbian Orthodox Monastery and Seminary Facts for Kids. Kiddle Encyclopedia.