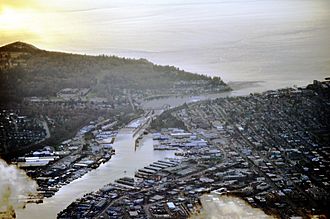 Salmon Bay is a portion of the Lake Washington Ship Canal, which passes through the city of Seattle, linking Lake Washington to Puget Sound, lying west of the Fremont Cut. It is the westernmost section of the canal and empties into Puget Sound's Shilshole Bay. Because of the Hiram M. Chittenden Locks, the smaller, western half of the bay is salt water, and the eastern half is fresh water (though not without saline contamination: see Lake Union). Before the construction of the Ship Canal, Salmon Bay was entirely salt water. 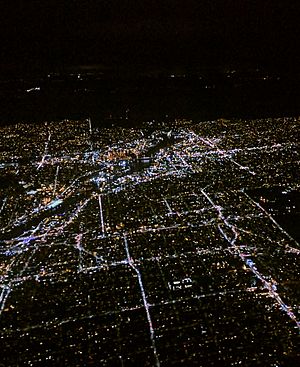 Night aerial view, looking west with Salmon Bay in the center, Ballard to its right. 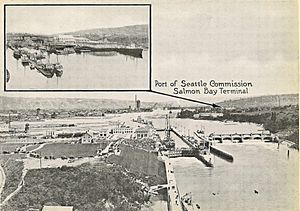 In 1919 the Fishermen's Terminal was known as the "Salmon Bay Terminal"
Black History Month on Kiddle
African-American Ballerinas:

All content from Kiddle encyclopedia articles (including the article images and facts) can be freely used under Attribution-ShareAlike license, unless stated otherwise. Cite this article:
Salmon Bay Facts for Kids. Kiddle Encyclopedia.