Salvia microphylla, the baby sage, Graham's sage, or blackcurrant sage, is an evergreen shrub found in the wild in southeastern Arizona and the mountains of eastern, western, and southern Mexico. It is a very complex species which easily hybridizes, resulting in numerous hybrids and cultivars brought into horticulture since the 1990s. The specific epithet microphylla, from the Greek, means "small leaved". In Mexico it is called mirto de montes, or "myrtle of the mountains". 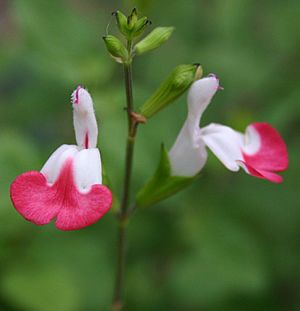 Salvia microphylla grows to 1 to 1.3 m (3.3 to 4.3 ft) tall and wide, blooming in its first year and growing to full size in its second year. The leaves are ovate shaped, of varying sizes, and smooth or lightly covered with hairs. When crushed, the leaves have a strong fragrance, which has been described as pleasant and mint-like, but also as similar to that of blackcurrants, leading to the use of "blackcurrant sage” as an English name for this species. It sometimes spreads underground, producing dense patches.

Along with its cultivars and hybrids, S. microphylla blooms heavily in late spring and again in autumn, with sporadic flowering year-round in mild conditions. The flowers are arranged in whorls, with a wide range of color: magenta, red, pink, and rose. 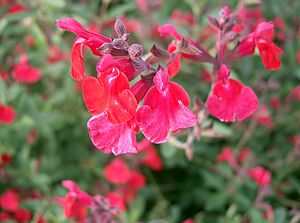 Botanist Carl Epling considered Salvia microphylla to have three geographical races, though the wide variation still causes confusion today, and there are conceivably more than three races. Adding to the confusion, Salvia microphylla is often mistaken for Salvia greggii, with which it frequently hybridizes. Epling distinguishes between the two by the S. microphylla leaves, which have serrated edges, compared to the narrow, elliptic, and smooth-edged S. greggii leaves — and by a pair of papillae inside the S. microphylla corolla.

In the U.S. it is sometimes called "Graham's sage," as it was named Salvia grahamii by George Bentham. It was also named Salvia neurepia by Merritt Lyndon Fernald. Both these botanic names are considered invalid as they are later than microphylla.

There is also confusion between Salvia microphylla and Salvia lemmonii, which was named by Asa Gray. Later, Gray began calling it Salvia microphylla var. wislizeni, considering it to be a variety of S. microphylla, though most taxonomies still consider S. lemmonii to be a unique species. S. lemmonii has leaves that are 1.5 to 3 cm (0.59 to 1.18 in) long, which are furry and sharp-pointed, along with flowers that are often vermilion or magenta, with the inflorescence shorter than that of S. microphylla. var. neurepia.

Some cultivars are hybrids with Salvia greggii (known as Salvia × jamensis) and other Salvia species; collectively they may be called "Mexican salvias". Technically they are evergreen shrubs or sub-shrubs, though they are not reliably hardy and are also short-lived. However, they are easy to propagate from cuttings. Those marked AGM have gained the Royal Horticultural Society's Award of Garden Merit.

Salvia microphylla is grown in central Mexico as a medicinal plant, and used for making tea.

All content from Kiddle encyclopedia articles (including the article images and facts) can be freely used under Attribution-ShareAlike license, unless stated otherwise. Cite this article:
Salvia microphylla Facts for Kids. Kiddle Encyclopedia.