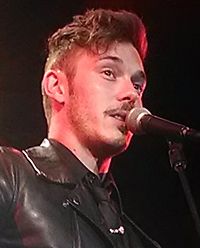 Sam Christian Palladio Scott (born 21 November 1986) is an English actor and musician. He is best known for his starring role as Gunnar Scott in the ABC musical drama series Nashville from 2012 to 2018. He was born in Pembury, Kent, England.

All content from Kiddle encyclopedia articles (including the article images and facts) can be freely used under Attribution-ShareAlike license, unless stated otherwise. Cite this article:
Sam Palladio Facts for Kids. Kiddle Encyclopedia.