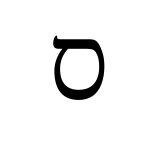 Samekh or Simketh is the fifteenth letter in many Semitic alphabets, including Phoenician, Hebrew, and Aramaic, representing.

The Phoenician letter is where the Greek Xi (Ξ, ξ) comes from.

Samekh represents a voiceless alveolar fricative. Unlike most Semitic consonants, the pronunciation of remains constant between vowels and before voiced consonants.

Samekh in gematria has the value 60.

Samekh and Mem form the abbreviation for the Angel of Death, whose name in Hebrew is Samael. It also stands for centimetre.

All content from Kiddle encyclopedia articles (including the article images and facts) can be freely used under Attribution-ShareAlike license, unless stated otherwise. Cite this article:
Samekh Facts for Kids. Kiddle Encyclopedia.