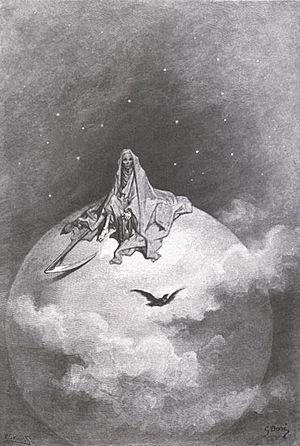 Sammael, also called "the Grim Reaper" in modern pop culture, sits enrobed with scythe in hand on top the world

Samael (Hebrew: סמאל) (also Sammael and Samil) is an archangel in Talmudic and post-Talmudic beliefs and stories, as well as Christian tradition and demonology. There are also other religions that believe in stories of Samael. Samael is often thought to be both good and evil. It is said that he was the guardian angel of Esau and a patron of the sinful empire of Rome.

Samael is often confused with Satan because he often has grim and destructive duties. He is often considered a fallen angel, like Satan and the chief of the evil spirits. One of Samael's roles in Jewish beliefs is that of the Angel of Death. In this belief, he is a fallen angel but remains one of the Lord's servants. As a good angel, Samael supposedly lives in the seventh heaven, although he is said to be the chief angel of the fifth heaven.

The website Catholic.org says Samael is a "Power", which means he is the chief of many warrior angels.

Powers are warrior angels against evil, who defend the world and people. They fight against evil spirits who attempt to bring chaos through human beings. The chief is said to be either Samael or Camael, both angels of darkness.

In Judaism and Christianity

In the Sayings of Rabbi Eliezer, he is said to be the one who tempted Eve, and impregnated her with Cain.

Samael is also sometimes said to be the angel who wrestled with Jacob, and also the angel who held back the arm of Abraham as he was about to sacrifice his son.

According to "The Ascension of Moses" (Chapter IV - Aggadah - The Legend of The Jews - By Louis Ginzberg) Samael is also mentioned as being in 7th Heaven:

"In the last heaven Moses saw two angels, each five hundred parasangs in height, forged out of chains of black fire and red fire, the angels Af, "Anger," and Hemah, "Wrath," whom God created at the beginning of the world, to execute His will. Moses was disquieted when he looked upon them, but Metatron embraced him, and said, "Moses, Moses, thou favorite of God, fear not, and be not terrified," and Moses became calm. There was another angel in the seventh heaven, different in appearance from all the others, and of frightful mien. His height was so great, it would have taken five hundred years to cover a distance equal to it, and from the crown of his head to the soles of his feet he was studded with glaring eyes, at the sight of which the beholder fell prostrate in awe. "This one," said Metatron, addressing Moses, "is Samael, who takes the soul away from man." "Whither goes he now?" asked Moses, and Metatron replied, "To fetch the soul of Job the pious." Thereupon Moses prayed to God in these words, "O may it be Thy will, my God and the God of my fathers, not to let me fall into the hands of this angel."

Samael is sometimes confused in some books with Camael, an archangel of God, whose name means "He who sees God".

All content from Kiddle encyclopedia articles (including the article images and facts) can be freely used under Attribution-ShareAlike license, unless stated otherwise. Cite this article:
Samael Facts for Kids. Kiddle Encyclopedia.