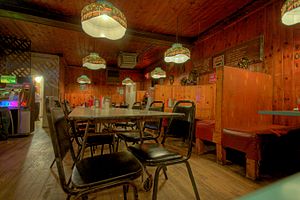 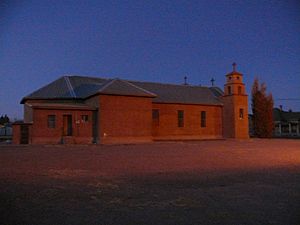 San Antonio is an unincorporated community in Socorro County, New Mexico, United States, roughly in the center of the state, on the Rio Grande. The entire population of the county is around 18,000.

The city supports a few small businesses, which include the original Owl Bar and Cafe (featured on an episode of the Travel Channel's Burger Land in 2013), Manny's Buckhorn Tavern (featured in 2009 on the Food Network's Throwdown! with Bobby Flay,), San Antonio Crane, a restaurant featuring Mexican food, a seasonal roadside market, and a general store.

San Antonio is the gateway to the Bosque del Apache National Wildlife Refuge. Interstate 25 runs along the west, and U.S. Route 380 begins there and heads east to Carrizozo. The Rio Grande is just to the east of San Antonio, and the BNSF Railway runs through it and has a small yard (not much more than a siding).

When part of the New Mexico Territory, the town was the birthplace of Conrad Hilton. His father was a merchant and hotelier in San Antonio, and Hilton learned the hotel trade there. Hilton was one of the original legislators in the newly formed state of New Mexico, and founded the Hilton Hotels Corporation.

San Antonio is about 28 miles from Trinity Site, where the first nuclear bomb was detonated on July 16, 1945. Residents reported tremors like an earthquake and the town received some of the remnants of the mushroom cloud (resulting in some radioactive contamination of the area, which faded quickly and does not persist today). The town was the meeting place for the scientists who detonated the bomb.

All content from Kiddle encyclopedia articles (including the article images and facts) can be freely used under Attribution-ShareAlike license, unless stated otherwise. Cite this article:
San Antonio, New Mexico Facts for Kids. Kiddle Encyclopedia.