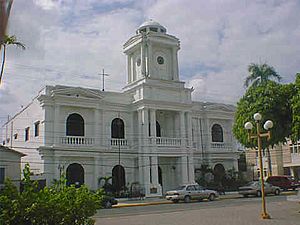 The Dominican city of San Francisco de Macorís is the head municipality of the Duarte province, on the northeast of the country.

It is located on the eastern part of the Cibao Valley; it is the largest city of the Dominican northeast and it is the centre of the region.

When the country was a Spanish colony, the region where the city is now was known as the Partido de Macorís ("partido" was an old Spanish subdivision like a municipality). It had the name of "Macorís" because on the mountains to the north of the area lived native people named Macorís or Macorix, different from the Taínos.

Those people that were living here founded, on 20 September 1778, the town in a place called El Rincón de San Francisco and, for that reason, they gave to the new town the name that it has now: San Francisco de Macorís, that in English would be "St. Francis of Macoris".

San Francisco de Macorís is at 135 km (84 mi) to the northwest of Santo Domingo, in the Cibao Oriental (in English, "Eastern Cibao"), the eastern part of the Cibao Valley. Most of the municipality is in the valley but the northern part of it is on the Cordillera Septentrional (in English, "Northern mountain range"); the mountains here are not very high. The altitude of the city of San Francisco de Macorís is 104 m (341 ft) above sea level.

Rivers here are short with their sources in the Cordillera Septentrional; they are tributaries of the River Camú, a tributary of the River Yuna that flows to the Samaná Bay. The most important river in the municipality is the River Jaya, that flows to the west of the city; San Francisco de Macorís is also known as "The City of the Jaya" because of this small river.

San Francisco de Macorís has a tropical wet climate (Köppen climate classification : Af) with no dry or cold season as it is constantly moist.

Cattle raising is also very important. with an important production of milk.

All content from Kiddle encyclopedia articles (including the article images and facts) can be freely used under Attribution-ShareAlike license, unless stated otherwise. Cite this article:
San Francisco de Macorís Facts for Kids. Kiddle Encyclopedia.